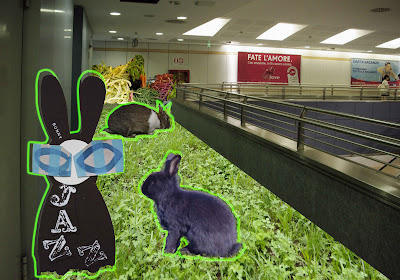 As the Wabbit continued his story about the space-time continuum, he got rather excited and his ears fluttered in a spectacular fashion. "The celery chunks eventually finished their song. Then they stopped dancing through the pyramid lattice and started to hum. The humming got louder and louder until it was deafening and quite painful to the ears." The Wabbit stopped and became contemplative. He fell silent for quite a long time until Lapinette broke the silence "What happened, what happened, what happened?" "The strangest thing," said the Wabbit. "The strangest thing I have ever seen. Suddenly there was a whoosh as the celery fused." The Wabbit paused, "... with what I do not know." "In Quantum Fusion the carrot lattice elements would be displaced" said Lapinette. "Sounds like the Fleischmann-Pons effect." "The whosit?" said the Wabbit. "Cold Fusion" said Lapinette. "Ah yes, that," said the Wabbit. "Well it might have been. The metro floor turned to grass and wabbits arrived to sample vegetables. "Were the carrots curly?" asked Lapinette. "They were," agreed the Wabbit. "That may explain everything," said Lapinette. The Wabbit looked at Lapinette and his eyes grew bigger and bigger until they met in the middle.
at July 19, 2011