The Wabbit meets an old Friend 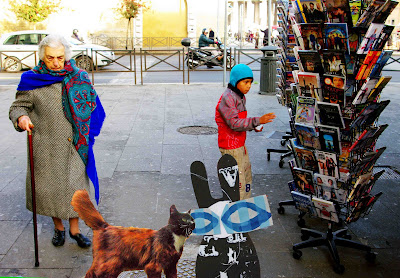 The Wabbit was undercover and was waiting for someone he knew. He had just discounted the old lady and the boy when he noticed a very familiar cat. It was Antiquicat from Largo di Torre Argentina! He was just about to greet him, when he remembered that he must not be seen to recognise his contact. "Oh hello micio cat," he said in a most friendly voice. "Oh what a good cat, what a pretty cat!" and he tickled him under his chin. "Don't overdo it, Commander Wabbit," whispered Antiquicat. "Sorry," said the Wabbit and thought for a second. "What was that you said about Commander Wabbit?" "Your commission came through after Peacock Island," said Antiquicat, "and you're not to order people around." The Wabbit had just been thinking of several scenarios where he did just that. "Of course not," whispered the Wabbit. "How vulgar." Antiquicat meaowed and rubbed himself up and down against the Wabbit in the interests of security. "Here are your papers Commander Wabbit. Also I have news. You have been followed by the sinister Agents Of Rabit. They put a tail on you." "I already have a tail," said the Wabbit flippantly and immediately regretted it. "Don't underestimate the Agents of Rabit," said Antiquicat. "They never give up." "Probably I can shake the tail," said the Wabbit and shook his own, just for fun. "Shortly you will have to return to Torino," said Antiquicat. "I'll take Turbina," said the Wabbit. "Lapinette will take her. You will take the Big Red Train," said Antiquicat. "Good grief," thought the Wabbit.
at June 16, 2011