The Wabbit and the Question of Peacock Island 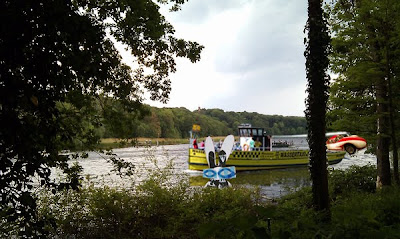 The Wabbit had been sent on a matter of the utmost sensitivity. On his arrival in Potsdam, he was guided to a specially converted water taxi and ferried directly to Peacock Island. Turbina the Jet Car had been authorised to accompany the Wabbit on the island and even though her permission papers had described her as an "agricultural automotive necessity", she hadn't grumbled. The Wabbit waded ashore through the reeds and felt like a most intrepid explorer. The undergrowth presented no problems for a wabbit, so as he hopped, he mulled over the delicate matter in hand. "This," murmured the Wabbit, "has not always been Peacock Island" He knew that a long, long time ago, it had been known as Wabbit Island and in these days it was covered in forest and filled with wabbits of all shapes and sizes. The Wabbit's briefing papers indicated that the King, Frederick William II of Prussia, had appropriated the island and built a castle. Then he had filled the island with peacocks, because he liked their feathers - and he would sit in his castle and watch them for hours. The Wabbit read that, in consequence, wabbits increasingly suffered wabbit exclusion. "Such a nice place," thought the Wabbit and although he knew its current German name, Pfaueninsel, he adamantly refused to say that name out loud. He stood for a minute and looked all around. Then he exclaimed boldly and loudly and to no-one in particular except the Wabbit. "So this is Kaninchenwerder!"
at June 03, 2011