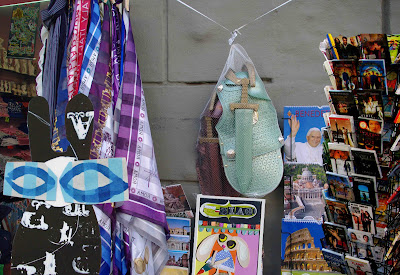 The Wabbit was acting in an undercover capacity so he had to wait. "Wabbit's the name, undercover's the game," he thought to himself and stamped the ground with his back paws. It was early morning in Rome. The weather was a trifle chilly and his trade more than a little slow. Nevertheless, the Wabbit had sold twelve postcards and stamps, two Roman centurion suits, a scale model of a helichopper and a football scarf bearing the slogan "Mo' Te Gonfio". The Wabbit did not know what the latter meant and hadn't asked. The Ciao Special Edition had nearly sold out and the Wabbit absolutely refused to sell the last one, despite several requests. "More in tomorrow. Come back tomorrow, I'll keep one for you," he would say to customers, cheerfully. The Wabbit wondered who exactly he was waiting for. It was someone importantly important and that someone had something for him. He had been told that he would recognise that person, but he was not to let anyone else know that he knew them. "They're not getting the last copy of Ciao Special Edition," he thought. "I'm buying it and I'm going to keep it in the car." The Wabbit took his emergency coin and rang up a sale in the till. Then he put his paws in his fur and hailed passers by in a loud voice. "Latest, latest, read all about it! Shameful scandal denounced by Espresso Magazine. Una legge-vergogna che salverebbe corruttori, truffatori e prestanome di mafiosi!" People were already turning round and he prayed that not one of them would ask for his last Ciao.
at June 15, 2011