The Wabbit kills time in Rome 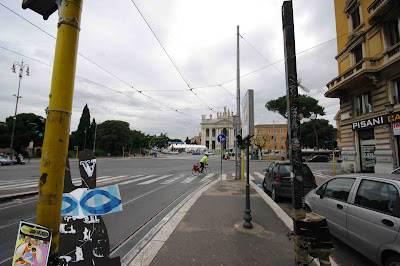 The Wabbit was at a loose end. He hopped around and he hopped around until his paws were so sore that he knew he was missing Turbina, his jet car. There were many tough traffic restrictions in Rome and they had so many penalties for minor infractions that not even Turbina's friends in the Carabinieri could get her a special pass. "Silly restrictions!" muttered the Wabbit. The Wabbit hopped right past the Coliseum. He avoided the tourist traps because he was looking for a special market where he had once purchased a very fine pair of paw warmers for only 2 Euro. "It's around here somewhere, I know it is," thought the Wabbit. "Someone must have moved it," he grumbled and stamped his back leg. He had looked with disapproval at the mock medieval market with its little white tents, because it was not the kind of market that met with the Wabbit's approval. The Wabbit liked big bustling markets with many different things sold very cheaply. "I want a rufty-tufty market," he complained to himself. A rufty-tufty market in the Wabbit's view offered some element of danger: a place where the Wabbit had to have his wits about him or he might be fleeced. Neither did he want a jar of caramelised carrots for 25 Euro. What the Wabbit wanted was to come across a rare jazz CD and no-one but the Wabbit would know its real value. This only happened on extremely rare occasions. "It's the seeking that counts, Lapinette," said the Wabbit to Lapinette's advertisement, which was everywhere. "Seek then, Wabbit," said Lapinette's advertisement. "I knew that would happen," said the Wabbit.
at June 20, 2011