The Wabbit jumps on the Footplate 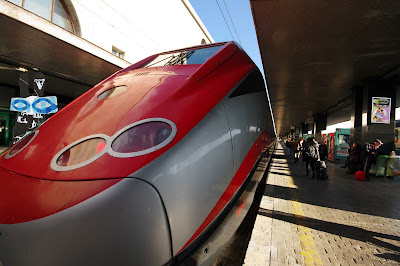 The Wabbit always liked to nod to the train driver. He felt it was only right and proper that he or she should be properly acknowledged. The train driver was aboard and he leaned from his window and looked down at the Wabbit and shouted. "Hey wabbit, are you coming with me?" "Yes," replied the Wabbit. "I am going to Torino." "Why don't you hop aboard with me," said the driver. "Oh may I?" said the Wabbit politely. "Are you certain that is permissible?" "Believe you me I know the rule book," said the driver, "and it don't say nothing about wabbits, that's for sure." So the Wabbit hopped up and into the cab of the big red train and then he hopped about and looked all around. There were many dials and switches that reminded him of Turbina the Jet Car and he kept his paws away from them, just in case he was suddenly propelled into a railway version of a time vortex. "Perhaps I can help you shovel the coal into the furnace," said the Wabbit with a twinkle in his eye. The driver's eyes became as wide as saucers until he realised that the Wabbit was pulling his leg. "Hey Giuseppe," he called to his mate. "We've got a live wire here!" And they laughed and laughed and laughed. And as the train pulled out of the station they were laughing still.
at June 21, 2011