The Wabbit joins the Procession 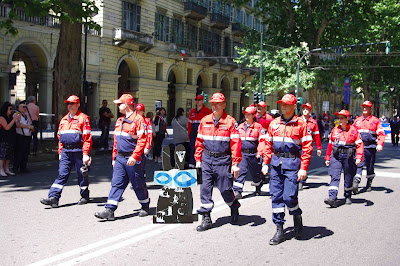 The Wabbit happily marched - or rather hopped - along the Corso Vittorio Emanuele II with the Carabinieri. "I only went out for carrots," he thought, "and look what happened." It wasn't easy hopping alongside the Carabinieri but the procession was, as he had been advised, informal enough. Each time they passed a group of onlookers the Wabbit heard polite clapping and he nodded his head in acknowledgement. Some people seemed to know the Wabbit and he heard them say to each other "Oh look! Isn't that the Wabbit?" Then the Wabbit heard someone say "What a smart coat that Wabbit is wearing," and he was relieved because he was not wearing his formal cape. He noticed a man who kept running ahead to take photographs and each time the man focused his camera, the Wabbit straightened up and looked directly ahead. "I think he must like my coat," thought the Wabbit and murmured, "perhaps I will speak to him later and order some prints." "Commander Wabbit," said the officer next to him. "Will you join us later for our gala dinner?" "May I bring Lapinette, my beloved?" said the Wabbit. "The Lapinette?" said the officer. "The same," said the Wabbit. A palpable frisson rippled though the ranks. "She will be wondering what happened to her carrots," said the Wabbit. "Our commanding officer will send an official invitation," said the officer. "And the carrots?" worried the Wabbit. "We'll send a bouquet." said the officer. "That'll fix it," thought the Wabbit.
at June 27, 2011