The Wabbit who came in from the Cold 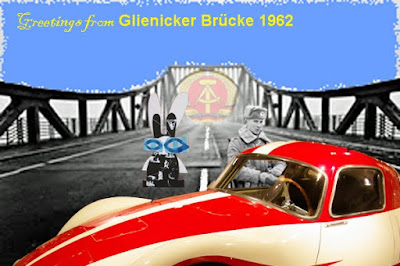 Turbina had told the Wabbit not to touch a certain switch, but the Wabbit couldn't help poking it. Turbina lurched violently and they both gave a mighty cry as they spiralled through a time vortex and came to halt with a shudder. "Told you so," said Turbina. "Might as well get out and hop around since we're here," said the Wabbit pragmatically. And so he did. He could see his breath make little puffs in the cold air as he hopped and looked. But as he turned to go back, his fur froze. A border guard was leaning in Turbina's window. The Wabbit was aghast and watched helplessly. He heard Turbina bark several short, sharp commands and to his horror the guard took his rifle from his shoulder. Then, to the Wabbit's surprise, the guard took three steps back from Turbina, presented arms, crashed his right boot down with a military thump and stood stiffly to attention. The Wabbit felt relieved. Then Turbina squirted the guard straight in the eye with her windscreen washer. "Good grief," thought the Wabbit and winced. But the guard saluted Turbina and wheeled around. Then, with a ceremonial goose step, he marched slowly back to his station, his every footfall echoing round the gloomy girders of the iron bridge. The Wabbit hopped back, leaned in Turbina's window and said, "How?" "Outranked," said Turbina. "What rank are you?" asked the Wabbit. "Higher than you," said Turbina. "I don't have a rank," said the Wabbit. "Poor thing," said Turbina. The Wabbit's sides were shaking with mirth but he slid into the driver's seat and settled down. "OK Turbina. Now where's that time switch thingy?" "I'll do it," said Turbina.
at June 11, 2011