The Wabbit and the Original Big Red Train 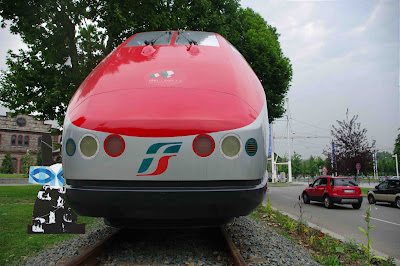 The driver and his mate got down from the Big Red Train at Torino Porta Nuova, but the Wabbit lingered. He couldn't help looking at the controls and his paws twitched at the sight of them. He was itching to push, pull or switch something, anything as long as he could touch it. Suddenly he heard a voice and it was speaking to the Wabbit. "Do you want to see something Wabbit?" The Wabbit looked all around and he could see nothing. But he spoke back anyway. "I do like seeing things," he said. "Watch out of the window!" said the voice and the Wabbit looked out. "Wow," said the Wabbit. They were no longer in the railway station. They were in the street, by a park and there were cars and lamp posts and signs. "I am the original Big Red Train. The first of the line!" said the Big Red Train. And the Wabbit could see the train was a bit different. "How did you do pull that switcheroo thing?" asked the Wabbit in slang. "Quantum mechanics," said the train. "OK," said the Wabbit. The Wabbit had heard of quantum mechanics and he knew this was theoretically possible. "I thought I'd bring you near to your lodgings," said the train. "Don't worry, they'll be along in a minute." "Who'll be along in a minute?" asked the Wabbit. "Your pals, Lapinette and Turbina." "So how do you that then - quantum mechanics?" said the Wabbit. "By telephone," said the train.
at June 23, 2011