The Wabbit and the Carabinieri 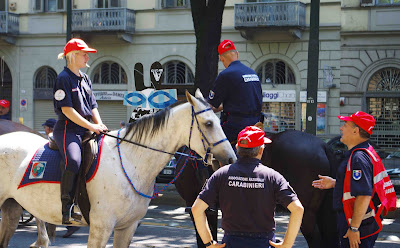 The Wabbit had only popped down to the supermarket for a bag of carrots when he heard a commotion. He couldn't help hopping round the corner to see what it was. There were Carabinieri everywhere and they were having a special celebration. "Commander!" The Wabbit looked around and around. "He must be important," thought the Wabbit. "I want to see who it is." He looked and looked and looked - and then he realised that it was he, the Wabbit, who was the Commander. "Hop up here Commander! This is Pegasus," The Wabbit hopped onto a platform and spoke to the officer. "You must be part of the Corazzieri, said the Wabbit thinking quickly. "Your fine mottto is Virtus in periculis firmior." The Wabbit was, as usual, hopelessly out of touch with military matters. "Cavalry Sir. Thank you anyway Sir" said the officer. The Wabbit was now regretting he had neglected to put on his formal cloak, but he had only ventured out for carrots. "My uniform is rather inadequate to the occasion, I'm afraid," said the Wabbit. "Don't worry sir, this is a gathering of the Carabinieri Association and everyone that has ever been in the Carabinieri can be here. It is quite informal." "I won't have to make a speech then," said the Wabbit. "Well you can if you want. You are quite well-known." the officer said encouragingly. The Wabbit thought about it. "Perhaps later," said the Wabbit. "May I stroke Pegasus?" "Base of my ears please," said Pegasus.
Virtus in periculis firmior: Courage becomes stronger in danger
at June 26, 2011