The Wabbit and Turbina prepare to Leave 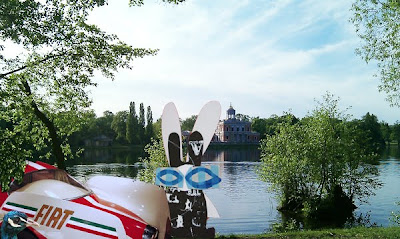 The Wabbit took a last long look at the newly named Free Peacock and Wabbit Island and turned to Turbina. "Did we get what we came for?" "More," said Turbina. The Wabbit agreed, because according to the briefing papers they were only on a preliminary venture. "Lets go," said Turbina. "Ah Turbina. Back to the city with all that traffic and noise and people thronging around," said the Wabbit. "Rome," said Turbina. Suddenly the Wabbit became aware that the peacock had returned and was looking at Turbina's shiny chrome bits. "What may we do for you, good peacock," asked the Wabbit cautiously. "I wonder if you could give me a lift to the Volkspark. We shall take in the Glienicker Brücke," said the peacock. "That was the Bridge of Spies," mused the Wabbit. "How time flies, Herr Pfau." The Wabbit pushed his paws deep in his fur and leaned against Turbina and thought deeply. "Yes, from the old time of the Big Cold. There was an old black and white film I recall." The Wabbit tried hard to remember. "With Harry Potter," he said finally. "Harry Palmer," said the peacock.
at June 08, 2011