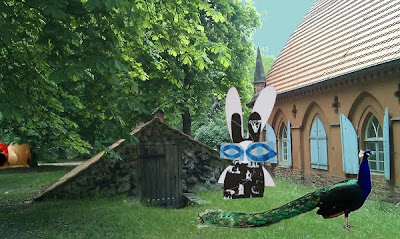 The Wabbit arrived at the agreed spot as instructed. It had not been hard to find and the journey had been pleasant enough. There, he waited by the little house. He had been told to be patient, so when some time had elapsed without incident, he thought nothing of it. Then a rustling of feathers alerted him to the presence of what could only be a peacock. Could this be the Spokes-peacock of whom he had been apprised? The peacock walked in his direction and the Wabbit was just about to raise a paw in greeting when it walked straight past him as if he wasn't there. Then the peacock stood and stared at his reflection in the window of the house. He stared and he stared and for all the time that he stared, the Wabbit waited patiently. Suddenly the peacock spoke. "You are the Wabbit and I am the Peacock." The Wabbit knew that already but he merely nodded as gravely as he could. The peacock turned and walked past the Wabbit again and continued around the house for some while. The Wabbit stood very still as advised. Then he took from his bag a packet of grains, small seeds and some flower petals and placed them carefully on the ground. Suddenly the peacock was back and had eaten nearly everything the Wabbit had brought. The Wabbit took his opportunity. "I come to speak of the Island formerly known as Wabbit Island." "Before my time," said the peacock. The Wabbit nodded. "It was before my time too." The peacock finished the food. "Then we agree on something. Let us go to the King's Castle and discuss the matter over more seeds." he said. "Meet you there," said the Wabbit who had no intention of following the peacock anywhere.
at June 05, 2011