Turbina Flies In (with the Wabbit) 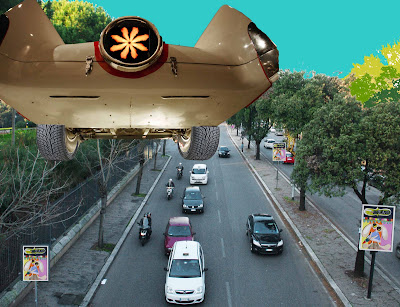 The Wabbit had pointed out to Turbina that Mach One was too fast even for the Autobahn. "The noise startles the wabbits," he said, although he did not know for certain if there were any wabbits around. Turbina had simply said , "OK" and taken off. Before the Wabbit knew where he was, he was looking down at the Alps. "I didn't know you could do that Turbina," said the Wabbit. "Jet Car" said Turbina. "Fair enough," said the Wabbit, who was enjoying the flight. "Let me know when we're in Rome." Turbina immediately said "We're here," and there was a strange drone from her engine as she throttled back. The Wabbit noticed the signs at the side of the road and asked, "Do you see what I see?" "I do," said Turbina. "It looks as if Lovely Lapinette is advertising something called Ciao. Could it be a new perfume, Turbina?" Turbina released a valve and a delicious perfume filled the car. "Turbina, you knew all about this didn't you?" said the Wabbit. "Surprise," said Turbina. The Wabbit strained to see the billboards and wondered. "I wonder what will be waiting for us now?" said the Wabbit, "more things for my list? Another mission?" "Oil, fuel, tyres," said Turbina. "Being in 1962 made me very hungry," said the Wabbit and his stomach grumbled. Immediately, the glove compartment dropped open and inside was a salad sandwich, neatly wrapped by Lapinette. And on it there was a label that said simply Ciao.
at June 14, 2011