28. The Wabbits pose for the Press 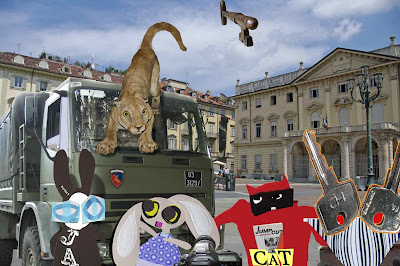 Safely home, the Wabbit and his team assembled to accommodate a photo-journalist from La Stampa newspaper. "Are you sure I'm in this shot?" said the Wabbit, "I'm rather on the edge." "That's a wide angle lens," said Skratch, "so be assured that everyone is in the shot." "Wide angle?" said Lapinette. "I hope that's OK for my face." "Am I cut out of this photo?" growled Puma, "I can pounce lower down if you like." "What about my ears?" said the Keeper of the Keys. "They fold you know." "We're all in the shot! You can take my word for it," said Skratch. "I just want to make sure that we'll be on the front page and not the Saturday supplement." "Shall I deal with that?" said Puma and he let out of his loudest and most terrifying screams. "Looks like we get the front page then," smiled the Wabbit, "and I want the top of the page." "Top centre" added Lapinette. "I favour headlines in Times New Roman," said Puma. "In bold," said Skratch, "and the text should be aligned flush left with a ragged right hand." "But what about the story?" asked the Wabbit, "will you get the facts right?" "This is Turin, Sir," said the journalist. "When the legend becomes fact, we print the legend."
at July 23, 2013