The Wabbit at the Jump Cut Caffè 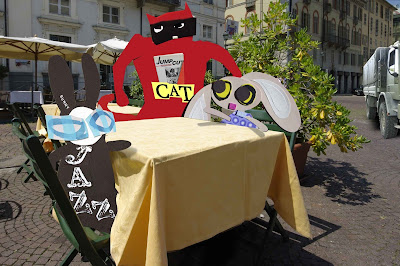 "Was that a Jump Cut I just felt?" asked Skratch the Cat. "You should know," said the Wabbit. "You're the Jump Cat." Skratch thought for a minute, but Lapinette broke the silence. "It certainly was. We all jumped." They nodded in agreement. "It wasn't a zoom or a cut-in," said the Wabbit. "It was from the same point of view, but we all changed round." "It was far from seamless," said Skratch. "Quite abrupt," said Lapinette. "A device to draw attention to the unreality of  life as we know it," commented the Wabbit. "By disrupting the narrative flow," said Skratch. They all took a very deep breath and now it was the Wabbit's turn to think. "I'm thirsty," said the Wabbit, "so where are our drinks?" "Service is a little slow," said Skratch. "And film criticism is so dehydrating," said Lapinette. The Wabbit leaned back and stretched. "While we're waiting we can think about our next adventure." "Anything on the wire?" asked Skratch. "It's the summer," shrugged Lapinette. "But we need an adventure," sighed the Wabbit. "No funds at the Department," said Lapinette, "it's the cuts." "The Wabbit's eyes flashed. "We'll cut them off at the pass!"
at July 26, 2013