25. The Wabbit and the Right Keyhole 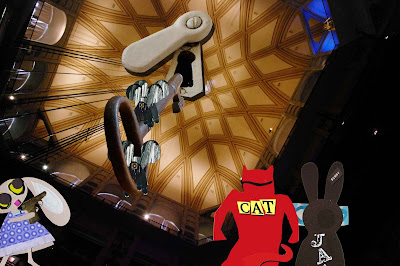 The Ice Mice didn't notice anyone or anything. They were much too intent on their task. And Lapinette had been right. The leader appeared to control the key through the other mice and gradually it made its way high into the roof of the Ice Mice craft. "I’ve seen something like this in Flash Gordon," said Skratch. The Wabbit kept his eye on the progress of the key. "What did he usually do?" he murmured. "On most occasions," said Skratch, "Flash Gordon’s accomplice Dr Zarkov would invent a new ray gun." The Wabbit paused to acknowledge a light flashing somewhere in the deeper recesses of his brain - and he looked across at Lapinette. "How are you for interesting ammunition?" he breathed. "I have some plastic-cased-telescoped bullets," said Lapinette, "they’re both undetectable and extremely light." The Wabbit smiled a sinister smile. "You’ve got lots then?" "Oodles," said Lapinette. She ruffled her dress and several rounds fell quietly to the floor. "OK. When I say fire," said the Wabbit, "give it everything you’ve got." "At the Ice Mice or the key?" said Lapinette. "The key hole," said the Wabbit. "I want to see daylight."
at July 18, 2013