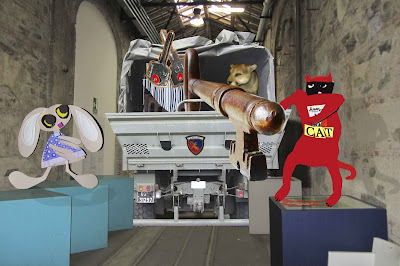 In a secret warehouse, Lapinette and the gang unloaded the big key from the truck. The key hovered slightly - which made moving it somewhat problematic. "Left paw down a bit, right paw down a bit, a bit to the left - no to the right," said Lapinette. "I think I know how to unload a key from a truck," said Skratch. "The key is really quite robust," said the Keeper of the Keys. "The Wabbit was quite specific," retorted Lapinette. "When we get the key safely out, Skratch and l have to stand on either side and touch it at the same moment." Skratch thought for rather a long time. "Do you mean to tell me I have to fly with this key?" "That’s the general notion," said Lapinette. Skratch thought again. "Surely not fly to the flying saucer?" Lapinette nodded gravely. Skratch flicked lint off his coat, just like he’d seen the Wabbit do on many occasions. "Who flies these crates any more anyway?" he laughed. "The Wabbit, probably," said Puma. "Well, talking about the Wabbit," said Skratch, "where is he?" "He’s co-ordinating," said Lapinette, "so he’ll find his own way." "What’s his crate of choice?" asked Skratch. "A hot air balloon," replied Lapinette. "He's trying to get a rise out of me," said Skratch.
at July 05, 2013