16. The Wabbit and Coordinated Strategy 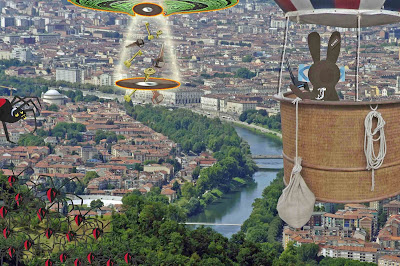 High above and far from Lapinette's truck, the Wabbit looked on as the Ice Mice used their beam to draw up every key in the city. He lifted his walkie talkie and spoke softly. "Come in Red Spiders." There was a pause and a crackle, then a voice spoke. "Do you wish us to move in?" said Marshall Duetta Spyder. It was quite the silkiest of voices and the Wabbit knew that Duetta was impatient. "Wait!" breathed the Wabbit. They waited and waited as more keys made their way to the saucer. The radio whined. "They'll take all the keys!" said Duetta. "But not our key," said the Wabbit and he kept on waiting. Suddenly a horn blasted with a Doppler shift that rustled all the hairs on all the legs of the Red Spider Battalion. Even though she was some distance away, Duetta caught a glint of light from the Wabbit's 28 teeth. "Now?" she asked. " No." answered the Wabbit. "When all the keys are inside, another key will appear." "Our key?" asked Duetta. The Wabbit grinned. "When the big key gets through the bay door, your battalion will cover the craft from stem to stern." "Nothing in or out!" said Duetta. "Seal it like cling film," said the Wabbit.
[cling film: plastic or food wrap (US)]
at July 03, 2013