27. The Wabbit and the Last Word 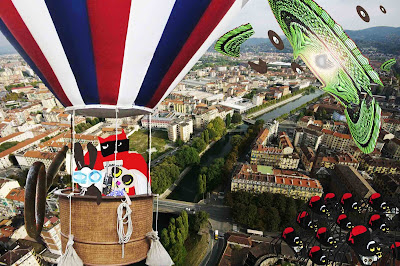 Safely in the Wabbit’s hot air balloon, the gang made their getaway with the giant key at their side. The Wabbit’s walkie talkie crackled. "Red Spiders, Commander," said Duetta’s silky voice. "We have the prisoners." "Take them to the interrogation ramp," said the Wabbit, "and don’t drop them." Even through the radio, the Wabbit could hear the rustling of spidery legs as Duetta and her cohorts flew quickly across the city. "What about the saucer, Commander?" asked Duetta. "Give it another 5 kilometres," said the Wabbit, "then there might be turbulence." The Wabbit pressed a yellow switch and gave the radio to Lapinette. "Do you want to say the word?" Lapinette looked questioningly. "It’s voice activated," said the Wabbit. "What should I say?" asked Lapinette. "What would I say?" smiled the Wabbit and he winked at Skratch. Lapinette shrugged somewhat like the Wabbit and spoke softly into the radio. "Kaboom?" For a second there was nothing. Then they heard a creak, followed by a small bang. "Is that it?" asked Skratch. The Wabbit held up a paw. A deafening explosion ripped the craft apart and hurled bits of spaceship as far as the Alps. "That's it," said the Wabbit.
at July 22, 2013