24. The Wabbit and the Ice Mice Heist 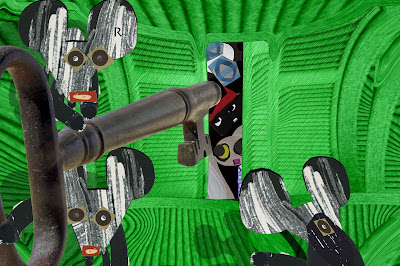 The gang made their way quietly to the loading bay by following sounds that were between a squeak and a crackle. Then together they peered from the doorway. Beside the Giant Key, an Ice Mice leader delivered instructions and the others prepared to guide it. The Wabbit drew close to Lovely Lapinette and whispered quietly. "When they touch the key they should fall under its control." "The leader isn't going to touch it," murmured Lapinette. "He's going to control the Ice Mice to control the key." "Oh, if only life was so complicated," smiled Skratch. Suddenly the Ice Mouse leader barked an instruction. "Put on the paw gloves," he shouted, "and move the key to the doorway." The Wabbit looked at Skratch and Skratch shrugged. "We're in the doorway," he said. "Then we should get out of the doorway," said the Wabbit. Lapinette indicated a small recess and one by one their heads disappeared. Now they were hunkered down in the darkness and all they could see was Skratch's eyes. "Can you stop your eyes glowing, Skratch?" asked Lapinette. "I'm afraid I have cat eyes," said Skratch. "They should come with a dimmer," quipped the Wabbit.
at July 17, 2013