26. The Wabbit & A Sudden Appearance 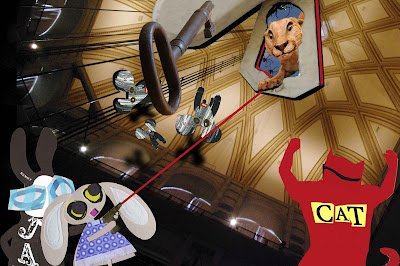 The Wabbit steadied Lapinette as she fired a stream of bullets at the keyhole. The inside of the lock disintegrated and for a second there was the daylight that the Wabbit had requested. Then something totally unexpected happened. Puma emerged through the keyhole, raised a paw and gave a roar that startled the Ice Mice and everyone else. The Ice Mice tumbled from the key and they squealed hideously as they fell. The Wabbit nudged Lapinette. "You don't see that often," he sad quietly. Skratch was ecstatic, because he and Puma had been friends for a long time. "How did you get so big, Puma?" he shouted. Puma let forth a sound between a growl and a scream - in a way that only mountain creatures could. "This is a hologram!" he roared. "I am inside our army truck in the Corso Svizzera." The Wabbit shook his head, but he knew that Puma must have got help and he mentally gave thanks. "Let's get that key in the air," he shouted. "And where is Marshall Duetta?" "I'm here, just outside," said a silky spider voice. "Let the key though the keyhole," commanded the Wabbit. "Then stay well clear of this superannuated saucer." Duetta's silence said everything. "It's due for retirement," explained the Wabbit.
at July 19, 2013