14. The Wabbit and the Budget Cuts 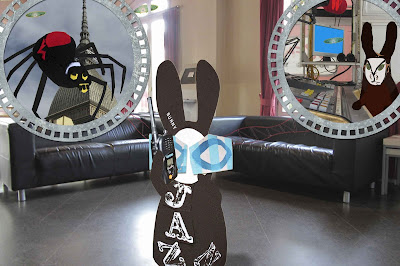 "Wabbit to Wabbit Command!" snapped the Wabbit, "and use the quantum key." "Reading you, Commander," said a weak voice. "Ledgerwood!" said the Wabbit. "What are you doing in Communications?" " Budget cuts, Sir," said Ledgerwood meekly. The radio hissed and whined and crackled. The Wabbit was furious and hissed like the radio. "Well I asked for back up, not a screw up." "Budget cuts, Sir," sighed Ledgerwood. "Please convey my astonishment from the field," shouted the Wabbit, "we’re not at a Gala Dinner!" The Wabbit smashed the radio with his paw and switched to another frequency. "Calling Marshall Duetta, Red Spider Battalion.This is a Code 3 alert." The Wabbit heard the silky voice of Duetta. "Commander, initiating Code 3 protocols. What‘s afoot?" "Are you ready to Rock 'n Roll?" said the Wabbit. "Always Commander," said Duetta, "how many of us would you like?" "All of you," said the Wabbit. "Prisoners?" asked Duetta. "Confine them to their vessel." "What vessel?" asked Duetta. The Wabbit grunted. "Look back, nearly on your six o’clock." "A lengthy pause ensued. Through the window the Wabbit could just make out the green craft of the Ice Mice hovering threateningly.  The radio burst into life. "It’s a rather fetching colour," said Duetta. "Paint it red!" yelled the Wabbit.
at July 01, 2013