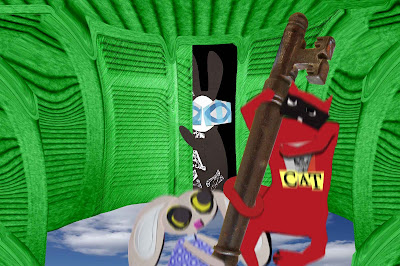 The key sailed through the bay doors of the flying saucer with Skratch and Lapinette attached. Then it gradually ceased vibrating. When their teeth stopped chattering, Lapinette and Skratch looked around. "Where's the Wabbit?" asked Skratch. There was a whoosh as a door slid open. "Behind you," said the Wabbit in a voice that startled Skratch and Lapinette.. "How did you get here first?" asked Skratch. "I've been here before," grinned the Wabbit. Skratch nodded and decided to leave the matter there, but the Wabbit noticed his puzzled expression. "I downloaded a plan of the craft in case it came in handy." "And you kept it in your fur?" guessed Skratch. "I keep my fur strictly analogue," chirped the Wabbit, "for security reasons." "Where are the Ice Mice?" asked Lapinette. "Shall we'll go down here and find out?" said the Wabbit, indicating the only route. Skratch held up a paw. "Just a moment," he said. "Remind me about what these Ice Mice do." "They menace around and change the weather," said the Wabbit. "But why would they do that?" asked Skratch. "Devilment?" suggested the Wabbit.
at July 09, 2013