The Wabbit interrogates the Prisoners 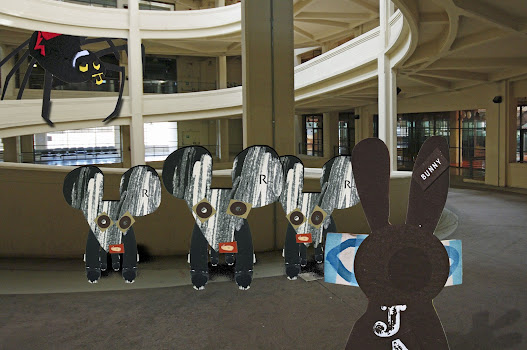 The Wabbit didn't really enjoy interrogations, even when he was the one doing them. So he made an arrangement with Marshall Duetta Spyder, who knew the terrain. The Wabbit would be tough and Duetta the more reasonable. The Wabbit stared at the Ice Mice, curled his lip into a sneer. and made his big blue glasses pop forward. "I want names! I want places!" He paused for effect. "And I want other things I haven't even thought of!" "We are Ice Mice one, two and three," said the leader of the Ice Mice. "And we're not obliged to tell you anything." "I'll oblige you to speak when you're spoken to," yelled the Wabbit. "Ah, Commander. You did speak to them," said Duetta. "Did I ask them to answer?" said the Wabbit. "You implied they should answer," said Duetta. The Wabbit turned away then wheeled around. "You don't have to tell me anything. I know everything there is to know." "Then why are we here?" asked the leader. Duetta waved her front legs. "Why don't you tell him why you think you're here," she said silkily. "We only wanted the key," said an Ice Mouse. "To control the weather," said the Wabbit. "Is that a crime?" said an Ice Mouse. "Everyone else does it," said another. The Wabbit sighed a very long sigh. "Your mothers shouldn't have let you out!" he snapped.
at July 29, 2013