20. The Wabbit plans the Way 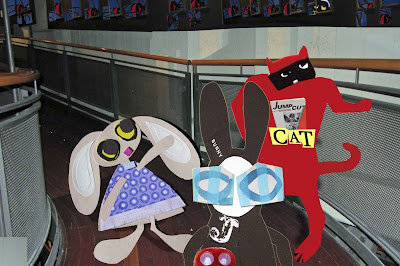 The Wabbit led the way down the walkway in a resolute fashion. Through the portholes, he could see Marshall Duetta and the Red Spiders gather as instructed. More and more came until they covered the ship and the light was entirely blocked. "Anyone got a torch?" said the Wabbit. "You do!" said Skratch and Lapinette together. The Wabbit smiled and rummaged in his fur. He fished out a serviceable torch from an old adventure and switched it on. It lit the walkway but the walkway comprised a long corridor that seemed to stretch for ever. The Wabbit continued to insist it was the only way. "They won't be expecting us so we have the advantage of surprise," he said and he hopped quickly forward, whistling a tune. "What's the surprise plan?" asked Lapinette. "The surprise plan is that we have no plan." Skratch grunted but the Wabbit waved his torch around and made shadows. "Having no plan is, in itself, a surprise plan." "You mean there's always a plan, even if there's no plan," asked Lapinette. "That's the first rule of planning," said the Wabbit. "What's the second rule?" asked Skratch. "That the plan will change," grinned the Wabbit.
at July 10, 2013