The Wabbit and that Adventure Caffè 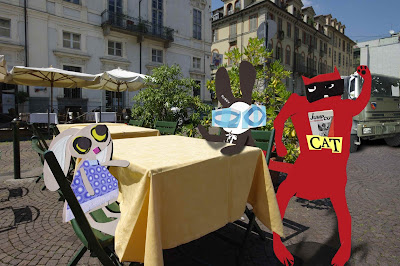 The Wabbit heard their truck pull up and then the sound of pawsteps. He looked at Lapinette and winked and Lapinette winked too. Skratch the Cat saw Lapinette wink and thought the wink was for him - so he winked back. "What an adventure that was," he purred. "I'm thinking of writing an article about it myself." "Surely not for Jump Cut Review" said the Wabbit. "Oh," said Skratch, with a disappointed tone. "How did you know?" "I'm intuitive," said the Wabbit. "Also it's on your t-shirt." "In all the excitement I'd quite forgotten," sighed Skratch. Lapinette waved a paw for attention. "I thought that adventure would make a film series, with each film sharing a common diegetic world," she said. Lapinette had benefited from a classical education and had read up especially for such a conversation. "Diegetic - is that a stomach complaint?" said the Wabbit. "You know it's not!" said Skratch. "It refers to narrative devices that create a consistent emotional world for the characters in the story." "Like jump cuts?" asked the Wabbit slyly. Lapinette tapped the table once with her paw. "In that story, there was only one jump cut," she said. The Wabbit and Skratch looked horrified. "Where?" they yelled.
at July 25, 2013