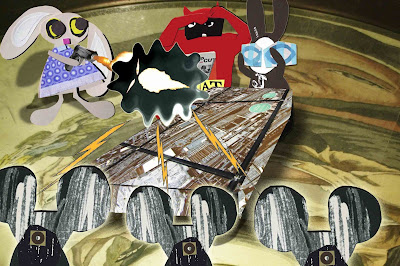 The Wabbit was about to make another smart remark when there was a sudden crack. Without warning, Lapinette had hopped to the side and fired an automatic at the weather cloud simulation. The Wabbit and Skratch the Cat lifted their paws to shield their eyes from the glare, as yellow bolts of lightning shot from the cloud and pierced the Ice Mice. They all heard cracks as the mice froze solid and stood stock-still like statues. "How on earth did you know?" asked Skratch. "Lucky guess," said Lapinette and she stuck the automatic back in her fur. Skratch turned to the Wabbit. "What about the plan?" "I never had an actual plan," said the Wabbit. "I was making it up as I went along." "Didn't you say that was a plan too," sighed Lapinette. "Yes indeed," said the Wabbit, "and now the plan has changed." His ears suddenly pricked up. "I thought I heard a crickle-crackle crickly-crackly sound." They all turned to look at the Ice Mice. "Lapinette," asked the Wabbit softly, "how long will they be like that?" Another crickle-crackle crickle crackled and six mice ears moved imperceptibly. "There's no manual for this," said Lapinette. "Run!" shouted the Wabbit.
at July 15, 2013