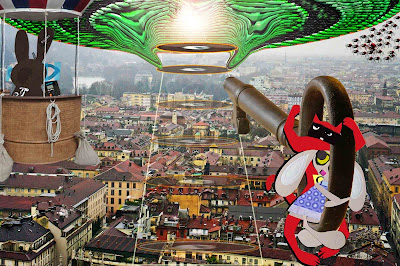 As the Wabbit flew closer to the bay door of the flying saucer, he saw a giant key leave the ground and he smiled. Everything was going according to plan. He breathed into his walkie talkie. "Red Spiders, Red Spiders, do you copy?" "Ready when you are," said Marshall Duetta Spyder. The Spiders banked and wheeled around the port flank of the saucer, but the Ice Mice inside either didn't see or chose to disregard them. Skratch and Lapinette clung grimly to the flying key and the wind tore at their fur. Skratch waved and called a question across to the Wabbit, but his words were lost in the gale. The Wabbit saw the wave and watched Skratch's lips move - but he had no need to lip read. He knew exactly what Skratch was saying anyway. "I've no idea what we'll do, Skratch," he called back, "we have to think on our paws." The Wabbit waved a paw up and down to make his point and Skratch nudged Lapinette. "The Wabbit has no idea what we'll do." Lapinette shrugged. "He'll concentrate on getting through on time. Then he'll execute a plan that will astonish them." Skratch gripped the key tightly. "It usually astonishes me too."
at July 08, 2013