7. The Wabbit and the Euclidian Faction 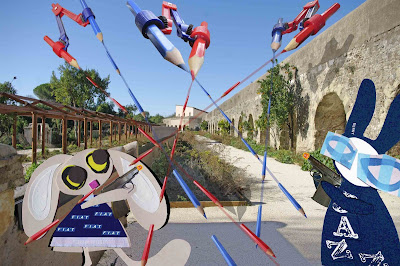 The Wabbit had joined Lapinette to the rear of Ledger's house, when he heard a drone that he recognised. He gripped Lapinette's arm tightly and pulled. "Run Run!" he shouted and they ran as fast as they could. But the three fighters looming from the sky were faster. They swooped over and back - and when they spotted the Wabbit and Lapinette, they started to fire. "Guided pencils!" shouted the Wabbit, jumping to avoid the sharpened missiles. "Who are they?" yelled Lapinette, fishing her automatic from her fur. "They're Euclidians," yelled the Wabbit. "They split from mainstream mathematics to take up armed geometry." "Are they the ones who employed Ledger to spy on us?" asked Lapinette. "I don't think so," said the Wabbit and he fired unsuccessfully at one of the fighters. "But they might be in league with others." They both stood their ground and for a while they shot at the fighters and dodged their missiles. "Are these heat seeking?" said Lapinette, kicking one as it zoomed past. "It's possible," yelled the Wabbit, "but I think I know what guides them in." Lapinette fired another unsuccessful shot. "Do you have any graph pads your fur?" asked the Wabbit. "Of course not!" shouted Lapinette. "I have six,” frowned the Wabbit.
at March 27, 2013