4. The Wabbit and the Property Business 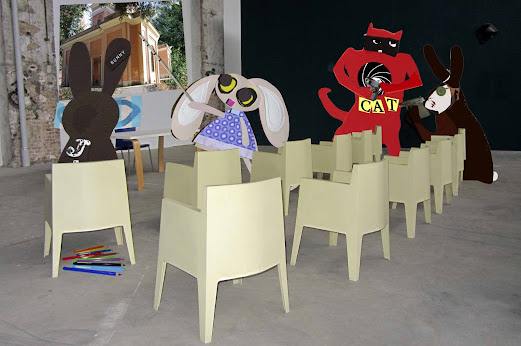 "Keep your paws away from the trigger guard, Ledger" said Skratch, Ledger fumbled with his weapon and Skratch frowned. "Now rack the slide. Don't point it at my elbow, I like it the way it is." "Is that Ledger's house in the woods?" asked the Wabbit. Lapinette tapped the screen with her pointer. "It is," she said. "Now that's a big mansion," said the Wabbit. "Ledger has a large family and takes in orphans," said Lapinette. "How many entry points?" asked the Wabbit. "Five counting the skylight," replied Lapinette. "Here, here, here, here and here." Her pointer tapped a staccato rhythm on the screen  "Nice piece of real estate," commented the Wabbit, "and it's given me an idea." Lapinette waited to hear a bizarre scheme. "We're going to buy the Ledger Wood," said the Wabbit. Lapinette sighed a very long sigh indeed. "Ledger!" shouted the Wabbit. "Yes, Commander," trembled Ledger. "You will purchase the Ledger Woods using the Dinosaur Fund," "Won't that be expensive?" said Ledger. "Enormously," said the Wabbit, "but it's such a good investment." "Ledger nodded and the Wabbit smiled. "Then arrange your colour pencils to let the enemy know we branched into property - and remind them that changes are due for the Ledger Wood." "Changes? said Ledger? "I'm your new landlord," said the Wabbit, "and I'll be doing what landlords seldom do." Everyone stared. "Making repairs," said the Wabbit.
at March 22, 2013