8. The Wabbit & the Hopway Skirmish 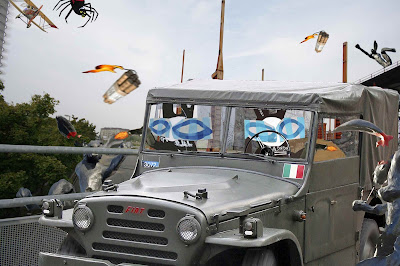 As Duetta sped towards the Hopway, she could make out the Wabbit’s jeep and hear the sound of explosives. Agents of Rabit were swarming up fences and trying to halt the jeep, while others rained down explosives from the bridge. "I didn’t expect an Agents' flying column," said the Wabbit, "and that was my fault." He fired a few rounds at an Agent and watched him drop to the road. "Nobody’s perfect," said Wabsworth as he dispensed with another Agent. A bundle of dynamite came his way and he scooped it from the air and threw it back. A satisfying boom from below made his ears stiffen pleasantly. "Take that for your trouble," he smiled, then hearing the distinctive note of a biplane engine, he looked up.  "I think we have reinforcements," he cheered, digging the Wabbit sharply in the ribs. "Is that Lapinette?" sighed the Wabbit, "because there’ll be hell to pay." "Yes, and Duetta the Red Spider," yelled Wabsworth. Now the Wabbit smiled and he sprayed the Hopway with bullets. "Excellent," he chortled. "They can fight about who rescued us." Wabsworth pushed a foe away from the fence, oblivious to the frantic squeals as the Agent pitched to his doom. "Do we need rescuing?" he asked. The Wabbit’s Makarov spat fire at another Agent. "Not really," shrugged the Wabbit.
at March 12, 2013