7. The Wabbit and the Big Surprise 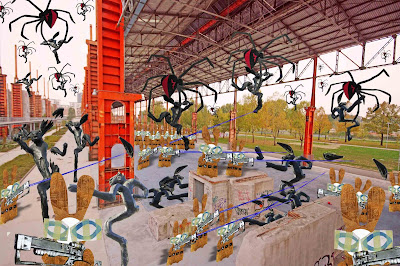 At Wabsworth’s command, the Wabbit’s élite guard stepped from the rows of golden wabbits and met advancing Agents of Rabit with a hail of snaser fire. At the same time, Duetta and the Red Spiders dropped from the shed roof - and seizing any Agents they could, disappeared into the sky. But there were many Agents and the more the Spiders seized, the more appeared. The battle raged for what seemed like hours, even though it was only a matter of minutes. Gradually, the Wabbit’s Guard gained control and mopped up remaining Agents. "Where’s  Commander Wabbit and Lieutenant Commander Wabsworth?" shouted the Field Commander. "They were supposed to be here!" As the sound of confrontation quietened, the guard became aware of another battle not too far away. "They need help!" yelled the Field Commander. He waved a paw towards the noise and ordered six troops to the Hopway. Way up above, Marshall Duetta Spyder paused as she heard ricochets of automatic gunfire and let an unfortunate Agent of Rabit drop to the concrete below. Then she wheeled and flew towards the Hopway with enormous speed. In the distance, the Wabbit and Wabsworth were engaged in a skirmish of their own and Duetta figured that things weren't going at all well. "Hang on Commander," she breathed. "Just hang onto your fur ..."