5. The Wabbit and the Big Wait 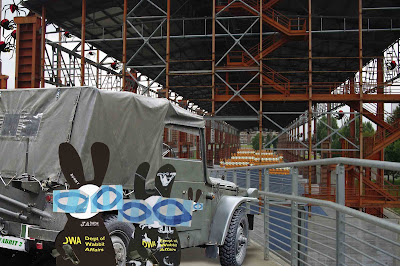 With all the golden wabbits displayed in the Big Shed, the Wabbit and Wabsworth, his android double, retired to a vantage point behind their one of their jeeps. They didn’t have long to wait before they heard sounds. Wabsworth nudged the Wabbit and the Wabbit looked up. Hordes of Red Spiders were descending on the shed. The Wabbit fidgeted. "Do we make a move, Commander?" asked Wabsworth. The Wabbit shook his head. "Don’t disappoint me, Marshall Duetta Spyder," he murmured to himself as he watched the flight of the Spiders. He figured he could make out Marshall Duetta herself  - she was far to the rear of the structure and for an instant he thought she made a squiggly wave. The Spiders settled on the roof and became very still. Even so, there were in such number that the covering groaned under the strain. "What are they doing, Commander?" said Wabsworth." "Waiting," said the Wabbit. "Just like us!" said Wabsworth. "It’s all the rage," said the Wabbit. Now Wabsworth was getting fidgety too. "Who are you really expecting?" "I don’t know for certain," said the Wabbit. "I only have the vaguest of clues." Wabsworth patted his automatic, then looked up. "Have you told me quite everything?" he sighed. "Now where’s the fun in that?" grinned the Wabbit.
at March 07, 2013