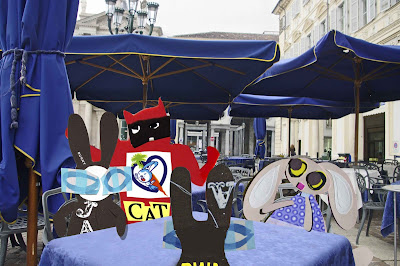 "Here comes Skratch!" said Lapinette. "I’m going to get in first," said the Wabbit. Skratch loomed into view, sporting a new T-shirt sent specially from Germany. "What was that for a sort of adventure?" asked the Wabbit. "Oh," said Skratch, "I really hadn’t thought about it." "You’re disappointing us Skratch," said Lapinette. Skratch smiled and inclined his head. "I thought the Wabbit avoided leading his audience into a position of dominant specularity." "I know what that means!" shouted Wabsworth, but everyone pretended not to hear. "I’m more concerned about this spy in the Department," said Lapinette. The Wabbit reflected. "Do you recall I said to tell anyone you liked about the golden wabbits?" Lapinette nodded. "Well, who do you like?" It was Lapinette’s turn to reflect. "I like that rabbit in Accounts," she said. "He always carries an enormous set of colour pencils." Skratch tapped the Wabbit on the shoulder and the Wabbit drew a little closer. "This colour pencil thing is a trick," Skratch said softly. "It’s a way of passing information undetected." The Wabbit thought long and hard. "Let’s keep this among ourselves," he said, "while we keep an eye on our friend, the bookkeeper." "Wabsworth!" said Lapinette suddenly. "If you were a colour what would it be?" "Transparent?" smiled Wabsworth.
at March 15, 2013