2. The Wabbit and Covert Surveillance 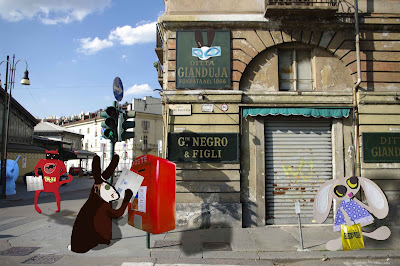 Ledger, the Department Accountant wasn't hard to track and the Wabbit and his team took up position. The Wabbit had made an arrangement with the Ditta Gianduja - so he watched from the empty haberdasher's shop. Skratch and Lapinette walked casually along the street bearing shopping bags, then back again, while Big Blue Snail lurked near the market to follow Ledger should the need arise. Only a moment elapsed before Ledger appeared. He looked around furtively, then seeing only shoppers bearing purchases, pulled a mail pack from his fur and put his pencil case inside. Then he popped it into the letterbox. It was an unusually hot day for the time of year, but even so, Ledger looked too flustered. He kept feeling in his fur as if he wanted to make sure something was still there. "May I help you?" asked Skratch. "It's just the sun on my fur," said Ledger. "You seem to have something stuck in there," said Skratch. "Oh I can see why you're uncomfortable. You have a pencil case down your front." "I always keep a spare pencil case there," faltered Ledger. "Just drop it in my bag and I'll help you carry it to your office," purred Skratch. "I wouldn't impose," said Ledger. "I rather insist," smiled Skratch.
at March 20, 2013