The Wabbit after the Adventure 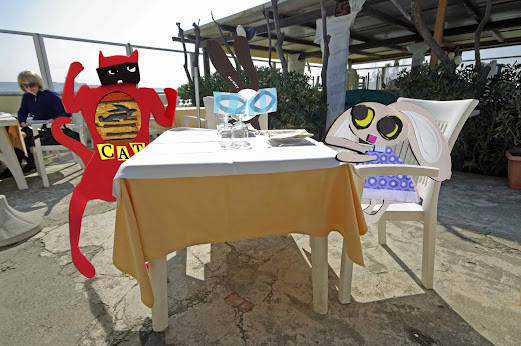 Tucked away in a seaside caffe the Wabbit hoped he could be incognito. "This is nice and quiet," said the Wabbit, "and no Skratch to ask me what kind of adventure that was!" Out the corner of her eye, Lapinette watched Skratch hove into sight, but smiled to herself and said nothing. Suddenly the Wabbit's ears flapped as if driven by a high wind. "Wabbit!" called a familiar voice. "What was that for a kind of adventure?" The Wabbit pretended not to hear but Skratch persisted. "I thought it was a splendidly crafted pastiche of John Carpenter’s 'Dark Star'" he purred. "An exercise in counter aesthetics!" "At least we didn’t explode in a supernova," sighed the Wabbit who wished he had never enrolled Skratch in that film class. "What a beautiful way to go," drawled Skratch. The Wabbit looked at Lapinette and the Wabbit looked back. "In case nobody can hear you laugh?" smiled Lapinette. The Wabbit was not to be outdone. "I went for the science and I stayed for the explosion," he said with a deadpan expression that startled even Skratch. Lapinette laughed. "Take Unut up on her offer, Wabbit." Skratch was all ears. "What offer?" he asked. "World domination," said Lapinette. "Oooohh," said Skratch, "Count me in." "It's not finalised," said the Wabbit. "When will that be?" said Skratch. "After lunch," said the Wabbit.
at March 01, 2013