1. The Wabbit and the Matter of Pencils 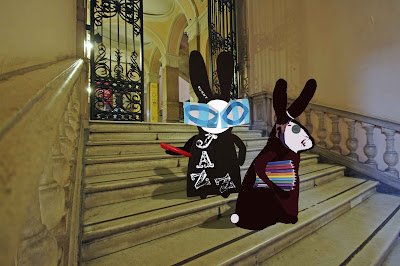 The Wabbit was determined to solve the problem of the spy at the Department of Wabbit Affairs and arranged to accidentally bump into the rabbit from Accounts on the steps. The rabbit's pencil set was obvious, so the Wabbit pulled a big red marker pen from his fur. "I say, Ledger!" shouted the Wabbit, "you appear to have dropped one of your pencils." Ledger turned cautiously. "Sir?" The Wabbit's ears inclined slightly towards Ledger. "That's not one of mine, Sir." Ledger's voice trembled slightly and he patted his pencil set. "These are my special audit pencils and I always have them with me." "Don't you have a laptop, Ledger?" asked the Wabbit smiling, "I can requisition you one if you like." "They're my back up, Sir," said Ledger and he turned to go. "One more thing, Ledger!" barked the Wabbit. "Yes Sir," replied Ledger meekly. "Can you calculate the damage to Turin City Council property from our last adventure - and make reimbursement?" "Shall I raise a cheque from the Dinosaur Fund?" said Ledger, before he could think. The Wabbit stared very hard indeed. "Of course not!" he said, "the Via dell'Arsenale Sports and Social Club as usual. On my desk by teatime." "There's no space on your desk, Sir," said Ledger. "There's room behind my filing cabinet," said the Wabbit.
at March 19, 2013