6. The Wabbit and the Wife in the Garret 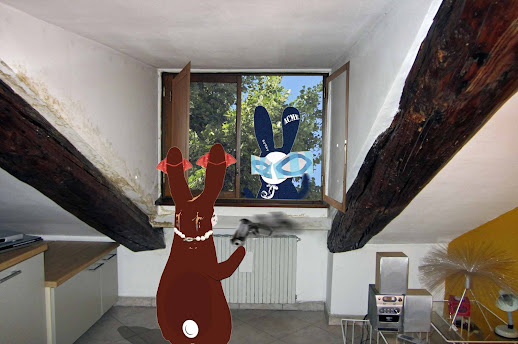 The Wabbit climbed to the window and pushed it open. "I heard you were coming," said an imperious voice, "and it's not a moment too soon." The Wabbit looked inside to see Ledger's wife. "Acme Repairs at your service Mrs Ledger, there's remedial work to be done." "I've been waiting some time," said Mrs Ledger, "so I hope you're going to do a good job," "The very best we can," smiled the Wabbit. "Sorry you've been inconvenienced." He dropped his voice. "I hope we're not inconveniencing anyone else?" He looked behind her and all around, then questioningly raised his eyes. Mrs Ledger subtly gestured towards the back of the house with a paw and the Wabbit nodded and tapped his coat. "We have rather a lot of equipment, Mrs Ledger, Ma'am - so perhaps you might store some for us?" He winked broadly then fished in his fur and brought out an automatic. Then with a flick of his paw he sent it spiralling across the room. Mrs Ledger caught it deftly and winked back as she tucked it away. The Wabbit made to climb down the ladder but paused. "Is there any work to be done in the grounds?" he asked. Mrs Ledger nodded. "There's rather a lot of weeds to be cleared and some garbage to be removed." "We'll do the garbage first," said the Wabbit and he disappeared from sight.
at March 26, 2013