3. The Wabbit and the Interrogation 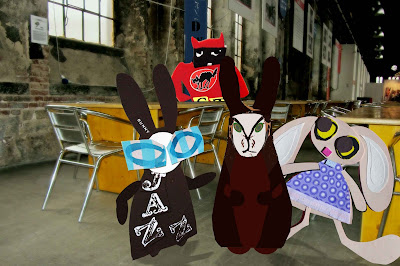 "Explain!" barked the Wabbit. "Ledger trembled. "Why did you inform on us, Ledger?" asked Lapinette quietly, and she touched him lightly with a paw. "They are holding my family hostage," he said. The Wabbit's fur stood on end and he had too many questions - but he let Ledger continue. "They're imprisoned in my home and if I don't post information, they will be harmed." The Wabbit's blood boiled. "Where is your home, Ledger?" he asked. "In the Ledger Woods," said Ledger. "That's the Accountancy Quarter," said Skratch, looking down at a map. "And the colour pencils?" asked the Wabbit. "Details of movements in and out of the Dinosaur Fund," said Ledger gravely. "No-one knows that exists," said Skratch. "Well they do now," said the Wabbit and he thought for a bit. "Look Ledger," he said. "You're seconded to this team. Now you're a double agent." Ledger looked terrified. "Everything comes though me," continued the Wabbit, "and everything goes out from me." Ledger nodded. "Skratch the Cat will teach you to deceive and dissemble," stated the Wabbit. "With pleasure," smiled Skratch. "So what's your plan?" asked Lapinette. "The usual," said the Wabbit. Lapinette raised an eye in query. "Sow confusion," he grinned.
at March 21, 2013