15. The Wabbit and Unut's Offer 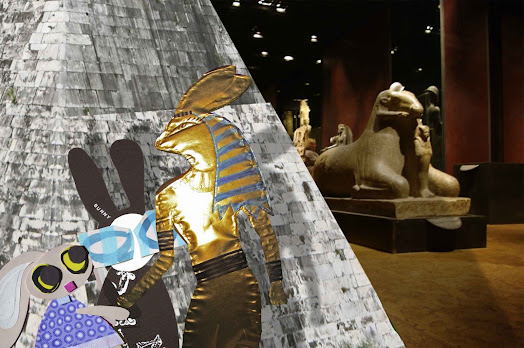 The Wabbit and Lapinette emerged from the pyramid in the Egyptian Museum, to be greeted by Unut, Rabbit Goddess. "Welcome home, my brave rabbits!" she cried, "your trip went without incident?" "Except for the talking bomb," said the Wabbit. "A mere frippery for the likes of you, Commander," said Unut. "Now please introduce me to your beautiful consort." "Marchesa Lapinette," said Lapinette, proffering a paw. The Wabbit cringed because it was far from protocol to shake the paw of a Goddess. But Unut bent down and clasped Lapinette's paw with such warmth that the Wabbit glasses misted. Not to be outdone, he proffered his own and after an initial mix up, the three shook paws vigorously. Unut turned directly to the Wabbit. "Commander, I am again indebted." The Wabbit was cautious, because he thought he knew what was coming. "The pyramid craft is yours if you wish," said Unut. The Wabbit looked stunned and spoke softly. "I rather prefer my jeep." "Whatever you require in your fight for emancipation of the rabbits is yours." Unut smiled. "Well, Commander, what do you need - land, gold, weapons?" "Not necessary in that order," quipped the Wabbit, although it was clear to Lapinette that he hadn’t actually refused. "You only have to ask," said Unut. "The planet will be a safer place in the paws of the rabbits." "I’ll settle for a coffee," said the Wabbit. And the Dark Basement of the Goddesses echoed loudly as they laughed and laughed.
at February 27, 2013