The Wabbit talks to the Rear 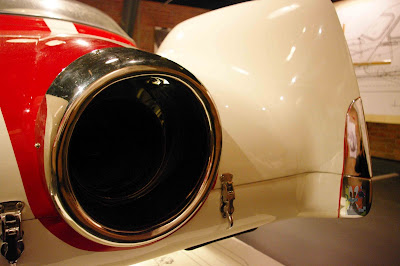 The Wabbit had never seen a car like this one. But he was even more astonished when The Car spoke straight out of its rear - and anything that spoke from its rear amused the Wabbit. "There is another like me. You must take delivery of that one for the family of Lapinette," said The Car. The Wabbit's eyebrows shot straight in the air. When this happened, they appeared to be attached to his ears - which he knew looked rather amusing to onlookers. He caught sight of himself reflected in the chrome of the car and could barely suppress a laugh. "You are a most funny Wabbit," he said to himself. "When will this be, Talking Car?" The Wabbit felt he had to ask, otherwise he would be at the mercy of circumstances. The last thing that the Wabbit wanted was to be at the mercy of circumstance, although he felt he was constantly placed in that position. "My name is Turbina," said The Car, and spat some fumes from its rear. "Pleased to meet you," said the Wabbit, coughing a bit. The Wabbit wondered when The Car would get to the point. "Delivery," said The Car, "will be in due course." The Wabbit groaned and waited for the inevitable, which duly arrived. "Wabbit! First you must go ... "
at March 31, 2011