The Wabbit gets the offer of New Brakes 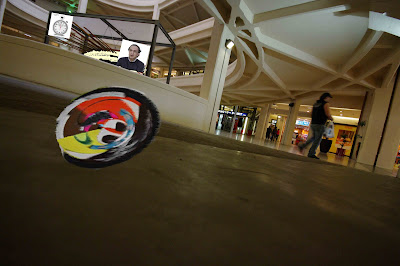 The Wabbit did not have time to worry about how to stop. As he reached the bottom of the ramp, the plush executive had somehow got to the bottom before him. With a single bound, he leaped over the wall and stuck his foot out, right in front of the Wabbit. "Woah," said the Wabbit as he flipped high in the air. He seemed to be heading straight down when all at once he found himself safely in the arms of the executive. "You need to work on stopping, Wabbit," said the executive. "Maybe I do at that," gasped the Wabbit. The executive held on to the Wabbit who was puffing and panting. "My name is Sergio, Wabbit. Why do you call me the plush executive?" "Because of your fur," said the Wabbit, taking the opportunity to snuggle a bit in Sergio's jumper. Sergio set the Wabbit down on all four paws. "That was good, very good. I think we can use that. Where did you learn how to cartwheel?" "At my father's knee, or some other low joint," quipped the Wabbit who had recovered enough to make a bad joke. Sergio groaned long and loud. "I think I can help you with brakes, Wabbit. But first I need you to take a look at something." The Wabbit sat on his hind legs and smiled his wabbit smile. He liked the idea of brakes very much indeed. On the other hand he felt quite exhausted. "Is it far?" asked the Wabbit.
at March 25, 2011