The Wabbit is philosophical on the Airport Bus 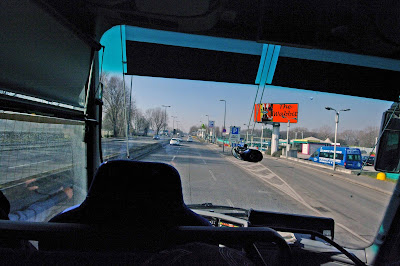 The Wabbit was on the bus to the airport and felt at a loose end. For preference he liked to hop just behind the driver because then he felt in control of the bus and this helped him to be a more relaxed wabbit. So the Wabbit began playing one of his favourite games for passing the time. It was a game in which he would make an alphabetical list of world literature featuring wabbits. He started as usual with Alice in Wonderland but had only got to Br'er Wabbit when a voice disturbed him. "Where are you off to, Wabbit?" "I'm not supposed to talk to the driver," said the Wabbit. "Rule doesn't apply to wabbits," replied the driver. The Wabbit was a little evasive. "I am going to the airport." "Yes, said the driver. I meant in a Quo Vadis kind of way." He paused. "Well, where do you come from?" The Wabbit really wanted to rest but decided to ask the driver a question. "Do you believe in time travel?" The Wabbit relaxed and sat back and waited. There was no reply. The Wabbit grinned broadly with all of his 28 teeth. "In a close universe perhaps I am the bus driver and you are the Wabbit." The bus driver laughed and drove in quiet contemplation for the rest of the journey. Then he helped the Wabbit from the bus, lifting down his small bag. He looked at the Wabbit with affection. "Goodbye, Wabbit. Don't stay away too long." The Wabbit smiled and was gone, lost amongst the cases and trolleys.