The Wabbit gets a Day at the Museum 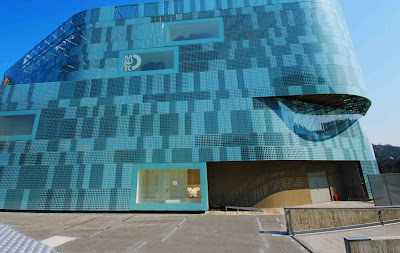 It wasn't far to hop to the Museum of Automobiles. The Wabbit had hoped that Sergio might give him a lift and save his paws, but Sergio just couldn't stop working. Probably he was in a helichopper at this very moment, thought the Wabbit. But Sergio's directions were extremely precise and the Wabbit had tucked them safely in his bag. "What an imposing building," thought the Wabbit and he wondered if it could be any bluer. But after a good look he knew was wabbit friendly. The Wabbit hopped on the wall and paused for thought. He basked in the sun for a bit and wondered what it it would be liked if he never paused for thought. He thought that would be very boring indeed. So he lay along the wall and stretched all his paws out. Then he took Sergio's notes from his bag and he read them most thoroughly. He was to proceed through the front door of the museum and go upstairs to see a particular exhibit. At that stage he would receive further instructions. The Wabbit asked himself if there was ever an end to further instructions. Then the Wabbit answered himself that there wasn't. Then the Wabbit asked himself if he would like it if there were no further instructions. And again he answered himself that then he would then have to make up his own instructions. By the end of the conversation the Wabbit was tired. So he hauled himself up and hopped off the wall and made his way around the blue building.
at March 26, 2011