The Wabbit talks to the Talking Jet Car 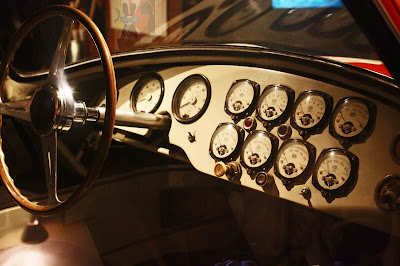 The voice continued as the Wabbit peered inside The Car. "Are you satisfied with the data display, Wabbit?" "Yes," said the Wabbit. He couldn't help answering The Car. The Car continued. "I was commissioned by the family of Lapinette in 1953. I am a prototype." "Oh really," said the Wabbit. The Wabbit paused for thought. The Wabbit's first thought was that he should have known that Lapinette had something to do with this. But still, the Wabbit didn't know what to say to The Car. When he didn't know what to say he always covered his confusion by asking a lot of questions. So he asked The Car about the purpose of all the instruments and when he had exhausted the topic, he asked about the fuel consumption. "I'd rather not say," said The Car, in a somewhat offhand fashion. "OK," said the Wabbit and he dropped the matter. The Wabbit hopped down and around to the rear of The Car. "This is interesting and different," he stated, in a matter-of-fact fashion that he reserved for interesting and differerent matters of fact.
at March 29, 2011