The Wabbit ponders in the City 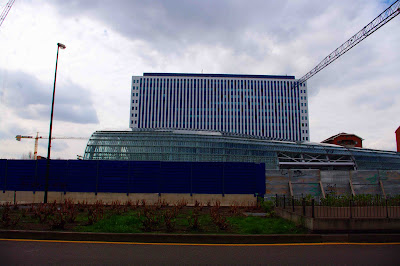 The Wabbit loped across the city. Things were changing here and the Wabbit didn't like it. It was dry and dusty and grit blew in his eyes. He turned up his fur against the sharp wind and hopped onwards. Why was there so much travelling? Why were there so many instructions? Why hadn't he taken the Metro? There were too many questions for the Wabbit. So he tried to stop asking them and keep going. Three blocks west, two blocks north. What was it exactly that Turbina had said? "That was one more question," thought the Wabbit. He looked at the overcast sky and looked down again. He looked up and down and around. Then he hopped under some scaffolding and stopped. Some people passed but they didn't see the Wabbit. They were too busy eating ice cream. "Funny place to eat ice cream," thought the Wabbit. But then, as he readily acknowledged, there were some things that he had never quite worked out. The Wabbit thought if he could reach a main thoroughfare, he would know where he was. Then, even if it took longer, he could get to where had to go. In the distance he could see big orange buses rumble past, crowded with passengers. "That'll do," said the Wabbit to himself. Suddenly the Wabbit was gone. But a child saw the Wabbit and pointed. "Isn't that a wabbit running after a bus?" Her mother turned and spoke firmly. "Wabbits," she said, wiping ice cream from the child's face. "Wabbits ... are not in the habit of running after buses."
at April 08, 2011