The Wabbit and the Surgical Vending Machine 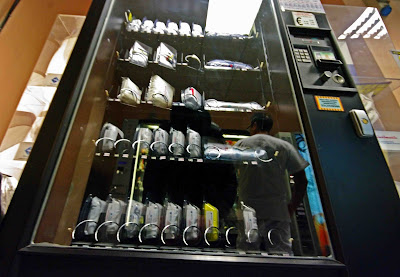 The Wabbbit rounded the corner with a turn of speed and there it was. The Wabbit knew - because there was a picture of it in his papers. He had never seen a surgical vending machine before and he stood to the side in case it spoke to him. There seem to be no end to the number of things that spoke to the Wabbit. He took some extra time to look at his extra special list which was entitled "Medical consumables" and read it out loud to himself . "Gauze bandage, surgical dressing, white, tasteless, soft, strong absorbency, ventilated well." The Wabbit looked up. It was rather specific but there it was at number B7. Suddenly a robotic voice spoke. "Please make your selection. Place your coins in the slot and wait patiently. Your surgical dressings will arrive in due course in the space below." "Maybe they will," thought the Wabbit. Engaging his special ears, he hovered and deftly flicked the requisite number of coins into the slot. Before he had reached the floor, there was a rickety rumbling and a dull thud as a package arrived in a glass screened cabinet. "Mind your paws," said another voice. The Wabbit turned to find himself addressed by a white-uniformed medic. "He can be well tricky that one." The Wabbit carefully prised the package from the space and crept silently backwards, one paw at a time, until he was out of sight.
at March 18, 2011