The Wabbit is whisked Through 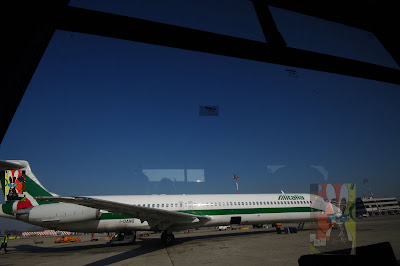 The Wabbit sat on the terminal bus to the aircraft. And as he headed out he couldn't help noticing his likeness on the tailplane. Perhaps it was a trick of the light. On the other hand, there had been a most odd occurrence in the terminal. The Wabbit had presented his documents and his bag in the normal fashion. Then, all of a sudden two burly attendants had appeared on either side and whisked him away. "Through here, Mr Wabbit. Everything is taken care of!" The Wabbit had pondered as he was quickly whisked. "Is it indeed? Is it really?" He had thought that perhaps some special arrangement must have been made to ensure his speedy return. "Here are your new travel documents," said the right hand whisker. The Wabbit had read them. "But they're for home back to to here." He recalled exclaiming this rather loudly. "Exactly Mr Wabbit." The Wabbit had put a paw to his head in exasperation. "Well, couldn't I just stay here, instead of going home and then coming back," The burly attendant smiled. "That's not the way it works Mr Wabbit, not the way it works at all. How would you know you had been if you hadn't gone?" The Wabbit remembered shaking his head. On the other hand, he had thought it would be nice to just relax, order a salad sandwich. snooze a bit. "This way Mr Wabbit." The attendant had then cleared the way. "Make way for Mr Wabbit. Stand aside for the Wabbit." The Wabbit cringed at the thought as he looked at through the window at the plane. It had its benefits, he thought. But sometimes it was hard to be a Wabbit.
at March 08, 2011