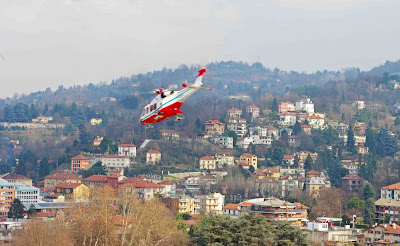 The Wabbit was always saying he couldn't be surprised. "I have seen it all," he would say prissily. "And I am seldom if ever impressed." This was quite untrue as the Wabbit well knew. The Wabbit had been whisked away again and this time he was astonished. In any case, he was getting tired of being whisked at short notice. His teeth chattered and his bones vibrated as he looked out and down at a city he vaguely recognised. "This helichopper business is all very well," shouted the Wabbit to himself. As usual, the Wabbit's military slang was hopeless. "If that's Turin, I could have come here on the Big Red Train." The Wabbit was screaming now as he felt his already sensitive stomach drop, then lift again, then drop. What hadn't been a surprise was for the Wabbit to see Franco Contadino at the controls of the helichopper. The Wabbit shouted at the top of his voice. "Franco! Less vibration. This feels like a rusty egg beater." "Sir! It's the turbulence, Sir! Never had a flight round here without turbulence." The Wabbit saw the landing pad loom rapidly into sight and as he poked Franco with his paw, he could barely hear his pilot's voice. "Brace for impact Sir! I mean prepare for landing, Sir!" The Wabbit covered both eyes with both paws and fell silent.
at March 12, 2011