The Wabbit proceeds from the Landing Pad 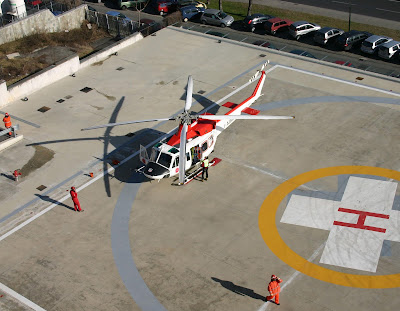 The Wabbit emerged from the door of the helichopper. His legs were shaking and his 28 teeth were chattering so much that he could barely hear his pilot, Franco Contadino. “Don’t forget the importantly important package. Sir! Gotta go, sir. Incoming injured, sir.” The Wabbit turned, chattering and muttering through his teeth. “I think I might be the incoming injured, Franco.” He looked at the package. There was always another package and this time he had to tuck it under his fur. It was bigger than usual and it stuck out. “It’s about time they thought about my fur,” grumbled the Wabbit. The Wabbit scanned his papers and hopped towards the hospital building. Inside, he scrambled amongst the feet of doctors and nurses and dodged the wheelchairs of patients who’s limbs stuck out at peculiar angles. “At least only my package sticks out,” thought the Wabbit, feeling a little sorry for his fellow mammals. He kept to the ground floor where he was to pick something up. “It’s always the same story,” thought the Wabbit. “Go here, go there, pick this up, deliver it wherever.” But secretly, the Wabbit enjoyed all these things he complained about and his mood quickly changed. So as he hopped to the supply room, as instructed, he found himself humming a ditty that he had made up himself. “I’m bringing news from nowhere, together with other stuff. I got rather fancy ears and a heart full of love.” The Wabbit was so delighted with his silliness that he nearly missed the supply room door.
at March 14, 2011